Free shipping to USA and Canada on orders over $499

Free shipping to USA and Canada on orders over $499 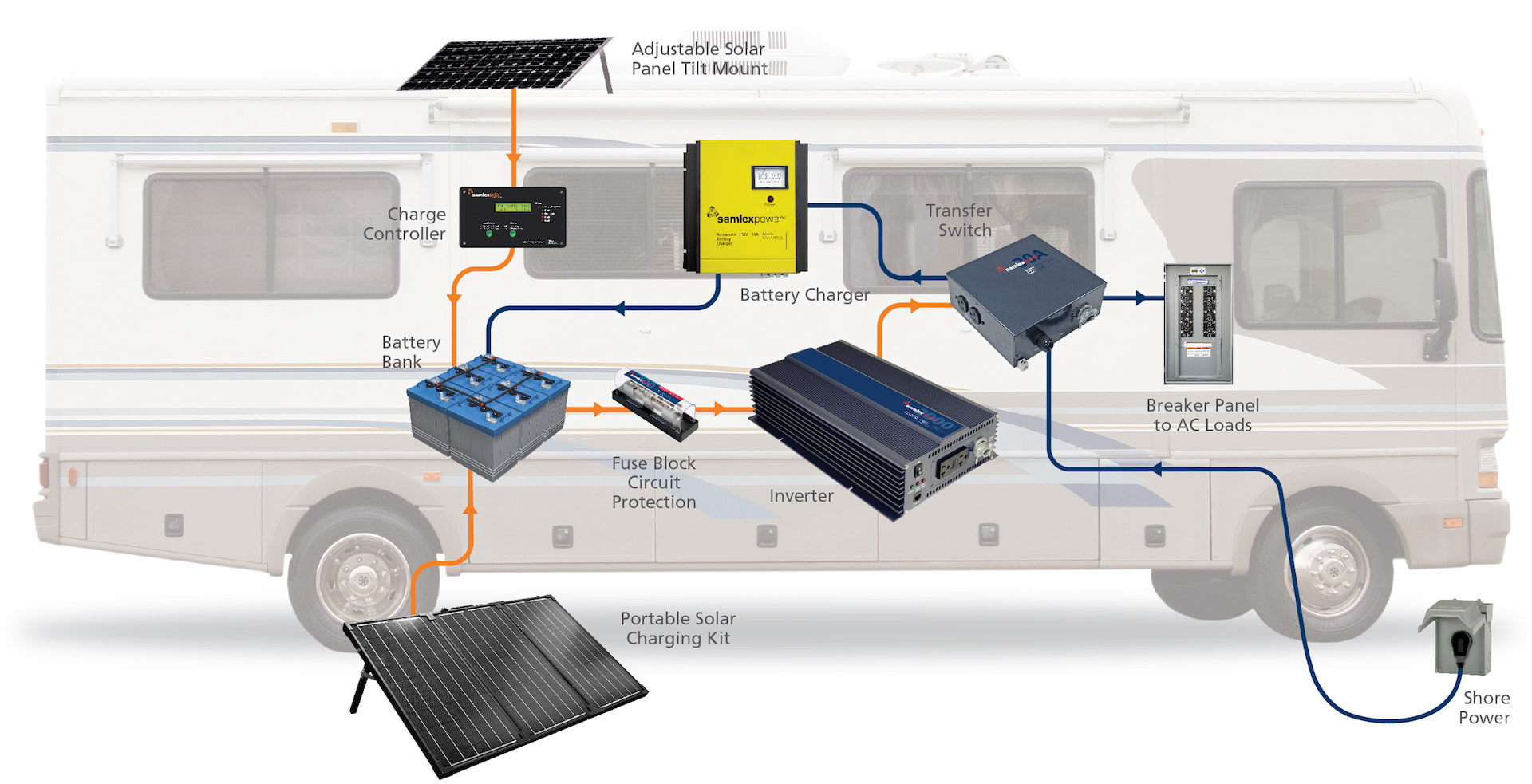 When assembling a solar system to go off-grid in your motorhome, it’s easy to get lost in all the details. In today’s blog, We will go over the three crucial components, which along with the solar array complete your solar power system. These components are the inverter, battery converter/charger, and the transfer switch. These three devices will enable you to become fully independent from the grid.

These essential devices protect and manage your power system, and allow you to extract the most from your solar array. With an inverter, you’ll be able to power your AC appliances from your battery. A battery converter will allow you to charge your battery from grid power or a generator.

Using a transfer switch, when you eventually connect to AC shore power, you’ll be able to leverage the 120V or 240V to power your appliances and charge your batteries. We’ll also go over the benefits of the newest technologies on the market. For example, the cutting-edge 3-in-1 IC-3000-12 inverter charger from Go Power!, that includes a built-in transfer switch and battery charger.

What is an inverter?

If you want to use your coffee pot, microwave, or simply charge your laptop in your RV without being connected to shore power, you need an RV inverter. Your batteries supply 12V Direct Current (DC) power, whereas most of your household appliances use Alternating Current (AC) power. The main function of an RV power inverter is to “invert” 12V DC battery power into 120V AC power for your AC-powered devices.

True sine wave inverters, like shore power, alternate smoothly, with a sinusoidal curve that has a rounded peak and a rounded valley. Pure sine wave inverters are nearly identical to household AC power, and will run electronics and appliances quietly, cleanly and smoothly. TSW is often the better choice, as it delivers a more consistent signal when compared to the choppier modified sine wave signal.

Modified sine wave inverters are a more affordable solution for running common resistive loads like toasters, coffee makers, or power tools. MSW produces spontaneous peak voltage for a few milliseconds, drops down to zero, then drops down to the valley. Many modern devices won’t run well or even at all on a modified sine wave.

What is a battery converter/charger?

Although charging your batteries with solar panels is ideal, sometimes you need to rely on shore power. The only problem is that a solar array generates 12V DC energy that is perfect for topping up your batteries, while generator and grid power is AC. That’s why a converter charger is essential. It is the only way to charge your RV battery system using AC energy like shore power or generator power.

An RV converter charger is the direct opposite of an inverter. Instead of converting DC to AC, battery chargers convert 120V AC power to 12V DC to charge your batteries. In addition to charging your batteries, the converter also distributes converted DC power to other RV components.

While a battery charger is usually included in most RVs, the quality and reliability are often subpar. Lower quality converters can lead to unwanted additional expenses: they’ll force you to use your generator more often, or use more shore power to keep your batteries charged. This can also be detrimental to the lifespan and capacity of your battery.

There are two types of converters: single stage and multi-stage. Single Stage charging is a common charging method in most low and mid-range motorhome battery chargers. Single stage charging is charging your battery at a fixed voltage. When the battery is low, a lot of Amps flow in, but as the battery fills up its internal voltage increases, slowing down the charging rate.

During the bulk charging state, the charger maintains a dynamic voltage to quickly charge the battery up to about 60-80%. As the battery pushes back, at a predetermined point, the smart charger switches over to absorption.

Three stage RV battery chargers are substantially better than single stage chargers. Multi-stage converters charge the battery faster when it’s low, and are healthier for the battery when it’s full.

What is a transfer switch?

An automatic transfer switch controls and automatically switches between the various power supplies of an RV. For example, a transfer switch can change between AC power coming from your battery though an inverter, and AC shore power. It also ensures that the electricity in the RV is not supplied simultaneously to prevent backflow to one of the sources.

In summary, an automatic transfer switch has many useful functions. It serves as a switching controller between your power sources, monitors the power supply, and protects your system from sudden overloads and backflows.

Benefits of inverter chargers for RVs and other motorhomes

Inverters combined with smart power converters are called inverter chargers. An RV power inverter charger can charge your battery bank with shore power and also provide power to run household electronics from your batteries. This is the best of both worlds. Some inverter chargers, like the IC-3000-12, also have built in transfer switches.

With a device like that, you can safely and reliably charge your batteries using your solar array or shore power. You can power your AC appliances from your battery, without having to connect to a separate AC power supply like a portable generator or the grid. Additionally, an inverter charger is compatible with all battery types.

An inverter charger will also automatically switch between power supplies thanks to the built-in transfer switch. Whenever you need to connect to the grid, it’s as simple as just plugging in.

In summary, if you’re planning your next van conversion, or just want to upgrade your existing motorhome, an inverter switch is a life-changer. It will replace three large devices, and will keep power flowing and your batteries charged all on it’s own. It’s the ideal device to maximize the comfort of living off-grid.